Types of Cannabis – What is Sativa, Indica and Hybrid?

Here is an overview of the types of cannabis (Sativa, Indica, and Hybrid). Often people are confused about what each type is and what the effects are for each. It’s becoming more important these days to know what each type of cannabis is because Canadians are faced with overwhelming options in our legalized cannabis frontier.

We now have huge cannabis menus to choose from at dispensaries, retails cannabis stores and online shops. The Sativa, Indica, and Hybrid strain options seem like they are endless, don’t they? Do you just sometimes just pick a strain because you like its name? Or take the budtender’s word for it? Well, keep reading and hopefully, you can make a more informed decision the next time you are standing in line at your local dispensary.

There is actually no official scientific evidence that explains the differences between Indica and Sativa strains of marijuana or even confirms that these differences exist. Nonetheless, they are widely accepted facts among the marijuana growing and using crowd.

There are some historical explanations for the beginnings of the Indica strain, also known as Cannabis Indica. It was first classified by Jean-Baptiste Lamarck, a French biologist, in the late 1700s. He also identified the fact that the plants were intoxicating. It was different from the regular hemp crops grown in Europe at the time, as they did not intoxicate the consumer.

Because of the differences between the European hemp crops (then actually known as Cannabis Sativa), Lamarck named his Indian discovery Cannabis Indica to establish its uniqueness from the European hemp. It was considered a therapeutic remedy of sorts in Europe during the 1800s and commonly used in Western medicine.

Sativa gives an energizing and stimulating effect Image by, ILGM

The Sativa type of cannabis is the strain that people seem to like smoking the most. This plant grows quite large, reaching up to 15 feet in some cases. While it is not a really thick plant, many growers like it due to how tall it can grow.

Their leaves are long, dainty, narrow, and considering their height potential, these are perfect for outdoor growing.  The seeds are soft to the touch, with no spots or markings on them. Do not expect this plant to flower quickly because Sativa takes its precious time, and even shifting the light cycles could have little effect on this.

Sativa is usually found below a latitude of 30° N, in places like India, Thailand, Nigeria, Mexico, and Colombia.

Sativa is often dried, cooked and consumed. While many people either vaporize or smoke this strain, it is the norm for users to use this to get high. You are not going to get stoned from using this strain, but it does have an invigorating, pick me up kind of effect that leads to feeling happier, unlike its more sedating counterpart, Indica.

It also can enhance your creativity, depending on the person. This is the strain you use when you want to be up and active during the day since it raises your energy and opens you up to fresh, new ideas. If you are an artist of some sort, you may love this one. Sativa is known for a high ratio of THC to CBN the two primary active ingredients in cannabis.

Sativa dominant strains are higher in the THC cannabinoid. This makes it less likely to be used for medicinal purposes, but it is still common in Ayurvedic medicine. They also work well to combat the symptoms of:

Cannabis Sativa is a strain that typically flowers for longer, has lower yields than Cannabis Indica, and has characteristically long thin leaves. They’re taller plants in general since they come from a region near the equator, which has longer summers (which is also why their flowering period naturally lasts longer).

A good thing about growing Cannabis Sativa is that the vegetative phase is shorter. There are even some Sativas out there bred to have shorter flowering phases. If you’re from a hotter climate or have trouble keeping your grow room temperatures down, then a Sativa might be for you — they can take high temperatures better than Indicas.

Want to grow Sativa strains in Canada? Get started by downloading a free Marijuana Grow Bible.

The Indica type of cannabis is a more solid strain in comparison to Sativa, but it does not have the height Sativa achieves. Indica strains generally grow between 3 to 6 feet tall (1 to 2 meters. It is a bushy plant with round healthy leaves, unlike Sativa. However, they both have marbled colored, soft seeds. Being that Indica is a short plant, this one is perfect for indoor growing.

While Sativa takes some time to flower, Indica flowers much faster and can be influenced a lot easier by adjusting the light cycle to promote this phase. It is most commonly found above 30° N, in countries like Nepal, Lebanon, Morocco, and Afghanistan.

The buds and flowers on an Indica plant will usually grow very close to each other and are stickier to the touch than Sativa plants. When you want to make hashish, Indica is the plant you would choose due to the amount of resin it contains.

This weed is a stoner’s favorite since it is more like a sedative and puts your entire body into a deep state of relaxation. It has so much CBN in it that this will surely take you there when you want to go far and beyond just a regular high. It has lovely healing qualities, and helps with:

Cannabis Indica is a strain of marijuana that is typically higher yielding, has a shorter flowering time, and has leaves that are shorter and wider than a Sativa’s. They’re smaller plants in general, but they can get quite bushy. Lots of growers prefer growing Indicas for these reasons.

Want to grow Indica strains in Canada? Get started by downloading a free Marijuana Grow Bible.

What is Hybrid Cannabis?

The Hybrid type of cannabis in modern cannabis cultivation and breeding has a huge number of varieties available. Many years of intense mixing and hybridization have created a huge spectrum across these three primary varieties.

The different mixes all have different characteristics, running the gamut of possibilities relating to flowering cycles, yield, CBN:THC ratios, and disease resistance, among others. In general, the purpose of a hybrid plant is to combine positive characteristics from different strains together.

Here are pictures of some famous hybrids:

The key differences between Indica and Sativa are the height of the plants, the length between buds, the size and shape of the leaves, the odor, the quality of the smoke, and the chemical properties themselves. In general, Indica is wide and robust while Sativa is long and thin.

Hybrids can vary greatly, but usually, they have some of the good qualities of both Sativas and Indicas. Because of the range of genes you can find in hybrid marijuana plants, it’s hard to specify a common height, leaf shape, or other distinguishing detail. However, hybrids are often bred to have higher yields and be more pest-resistant, which is great for growers. Hybrids are extremely popular. Most of the seeds available are hybrids. To know what you can expect, be sure to read the growth descriptions before buying. 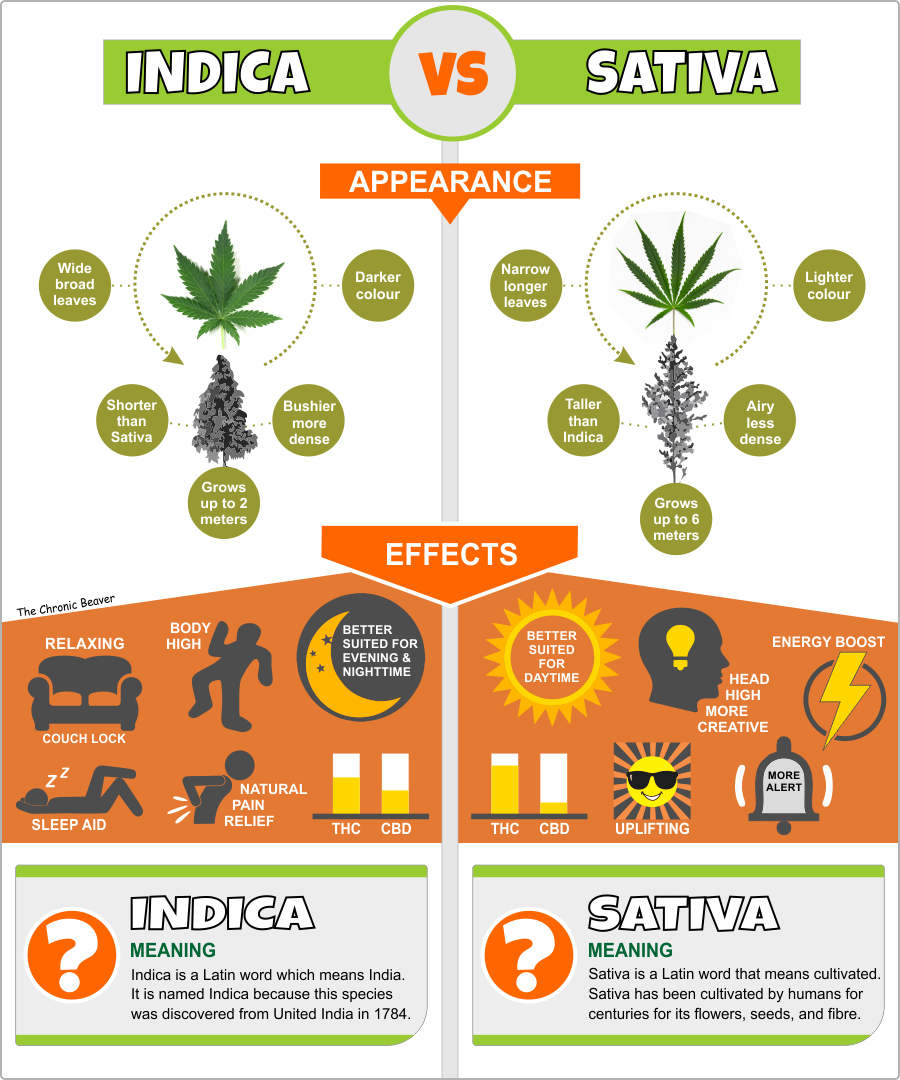 Created by The Chronic Beaver

This site uses Akismet to reduce spam. Learn how your comment data is processed.